Rio Arriba County continues leading the state in the number of babies born with neonatal abstinence syndrome (NAS) with about 64 per 1,000 births in 2015. That is more than six times the state’s average. 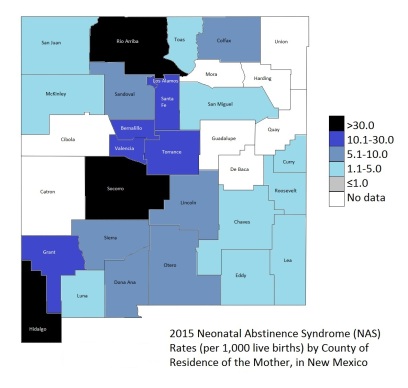 In the last few years, New Mexico has seen an increase in opioid addiction and overdose deaths due to prescription painkillers or opioids — drugs often leading to use of the street drug, heroin.

“Opioid addiction during pregnancy causes Neonatal Abstinence Syndrome which refers to a group of problems that occur in a newborn who was exposed to addictive opiate drugs while in the mother’s womb,” Rhien said.

Leeman says the Milagro Program is an outreach program helping communities care for babies that have NAS as well as caring for women with opioid addiction during pregnancy.

“The number of pregnant women on opioids has been rising over the last five years,” Leeman said. “We’ve expanded our program so that we’re now based in four different sites in the [Albuquerque] community.”

With the program expanding to more locations in the Albuquerque area, Leeman says separation consequences may arise in other NM communities, depending on the hospital.

“If they’re in a rural hospital where they’re not used to caring for these babies, what they’ll usually do is transport the baby to UNM or Presbyterian [hospital],” Leeman said.

This transfer separates mothers from their newborn baby in order to seek the necessary care provided by many Albuquerque hospitals.

Data from the past five years shows an increase in many NM counties in the rates of NAS per 1,000 births.

“We are committed to ongoing efforts to address prevention, treatment and effective response to opioid misuse and abuse,” Rhien said. “We continue to work to address NAS so babies and their mothers with opioid use disorders can live healthy, productive lives.”